Hi Everyone, I realize there are a lot of professional Mechanics and Technicians here and I am just a backyard guy who works on his car when he has to but I want to share what I know. My Father was a Mechanical Engineer who grew up on a farm working on tractors, combines, harvestors, and the like and he taught me to use the right tool for the job and to always buy good tools because when you buy cheap tools you buy them twice; once when you buy them and the second time when you replace them. In 98% of all cases I have bought Craftsman (I inherited all of my Father's tools when he died and I have some great stuff, some that is not made any more by anyone), or I buy Stanley, or Husky and I am happy and have never had a tool fail me.

As far as the right tool for the job goes I am finding that in this world just because a metric tool is called for doesn't mean it is the best tool for the job. Case in point. I was at a friend's house a few weeks ago working on my brakes. I live in a Condo where the people here are anal retentive to the max and go ballastic every time I lift the hood to check the oil or get out my gauge to check the air in my tires and guess what? Screw them, I take care of my cars the best I am able and checking the tires is not auto repair so they can take a flying leap as far as I am concerned. For bigger stuff I go to my friends house where we pull my car onto the driveway in his back yard behind the privacy fence and have at it. I finished working on the brakes and was putting the wheels back on and I reached for the socket I had set out for the wheels and realized I had a 13/16" socket in my hand and not the 21mm socket which is spec'd for the wheel lugs on my 01 Camry and that I usually use. I slipped the 13/16 socket onto the lug to see how it fit and it actually fits better on my wheel lugs than the spec'd 21mm socket. It is just a little snugger with not as much play when I rotate it right and left by hand so from now on the 13/16" deep socket is the one I will be using whenever I pull the wheels and especially now since I have an Impact I will be using the 13/16". I am also planning to keep an eye our for this type of fit whenever I have to wrench anywhere else on my car.

A wise craftsman...knows when to cheap out with Harbor Freight and when not to.

If you don't already have them, I recommend getting a set of impact-rated sockets (usually black). Chrome sockets are not to be used with impact tools - when they fail, they will shatter and send shrapnel flying everywhere. Vice versa also applies, impact-rated sockets are softer and springier, so using them in high-torque non-impact applications will cause failure (albeit not as dangerous as using chrome on impact). Case in point, I bought an impact-rated reducer to use my 3/4" breaker bar with a 1/2" socket to get off an overtorqued 2JZ crank bolt...it sheared in half as I steadily increased the force. Bought a chrome reducer adapter, worked and broke the crank bolt loose. HTH

Also, I've started to buy Tekton tools from Amazon...it's like the new Craftsman, and their customer service and lifetime warranty is great. I've been somewhat disappointed with Craftsman in the past several years (the last good set I bought was almost 10 years ago), but I do still pick up some of the better stuff from time to time. Usually at Lowe's...I just bought the impact-rated swivel u-joint set. It's actually rebranded by Matco (and marked up), Rzeppa-style swivels are so much better than spider u-joints.
Last edited: Mar 2, 2020

Anyone worth their salt will not be a brand loyalist for every single tool. Every manufacture has their uses. For regular sockets, I use Craftsman. For impact, I use a set from Harbor Freight. I don't use impact sockets that much so it's fine. I have the cheap walmart low profile jack and have never had a problem with it. Porter Cable for all battery powered tools simply because matching batteries.

I'm all about using vintage tools. 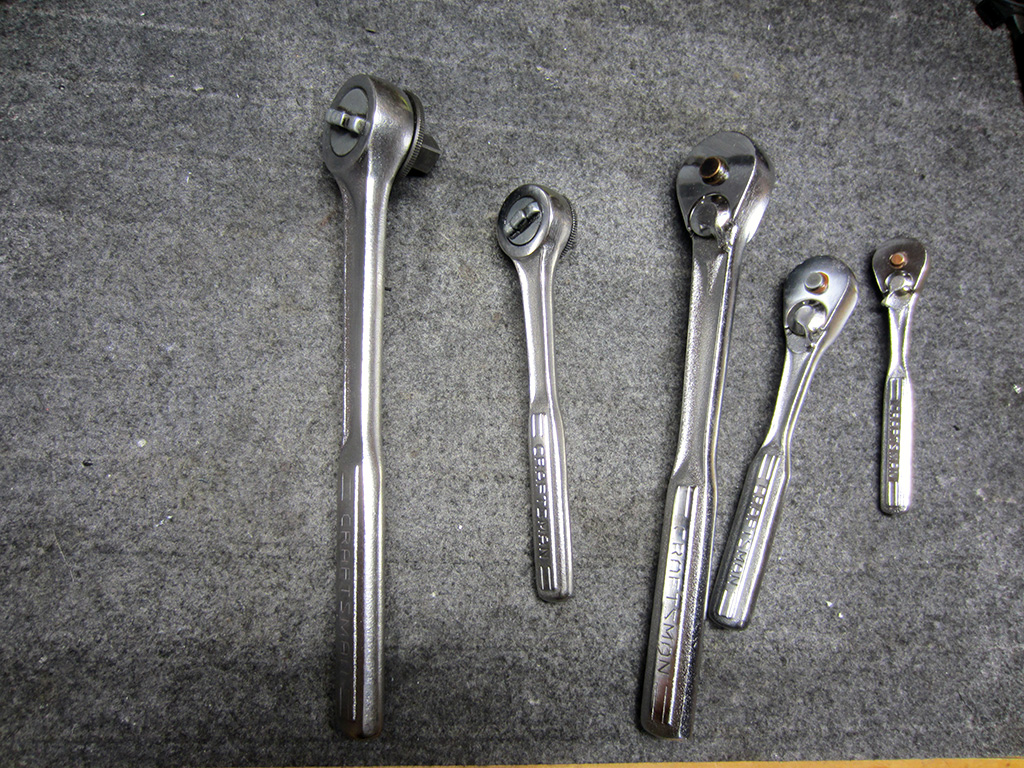 @71Corolla I've got you 1 better. I have a Craftsman 1/2" ratchet just like the one on the right side of your photo BUT it does not have the socket quick release push button. I got it from my Father who got it from his Father. It is old and I am sure has stories to tell.

CamGuy01 said:
@71Corolla I've got you 1 better. I have a Craftsman 1/2" ratchet just like the one on the right side of your photo BUT it does not have the socket quick release push button. I got it from my Father who got it from his Father. It is old and I am sure has stories to tell.
Click to expand...

The set on the right doesn't have as many teeth as the two on the left it's about half actually. Still great ratchets although I did break the 1/2 one on the left was able to find a repair kit. Was my fault I used a giant pipe trying to break loose an axle nut (at a salvage yard) shredded the mechanism. The forged casting didn't get damaged.

These are hand me down from my father, can still find them on Ebay. I bought a few repair kits just to have. The V-series breaker bars are also awesome they have very little bend to them makes a big difference.

Got a pic of your ratchet?

Owing to the fact that there is an HF not far from where I work I stopped in on my lunch break today and picked up a set of metric impact sockets in 6-point 1/2" drive so at least for now I think I am set. Something I didn't mention is last week I scored off of OfferUp a Craftsman 3-drawer tool box to keep me better organized. Up until now I have just had a small tool box that I put everything into and it was getting to be a pain to find anything but now I think I will do a little better.

After I finish this post I think I am going to call Rickie Bobbie and see if he is looking for a Crew Chief Catch you on the flip side boys!

I keep a lot of my tools in one of the Mechanics Carts.

I got it when the white first came out and they had a sale for it. I paid less than $150 for it new. You should have seen how I got it home since the box was so big. I bought rachet straps since I didn't have any in my car and strapped it to the top of my slammed corolla lol
You must log in or register to reply here.
Share:
Facebook Twitter Reddit Pinterest Tumblr WhatsApp Email Link
Top